If you cannot attend services in person, access our live streams here!

Basketball exchanged for the Bible. 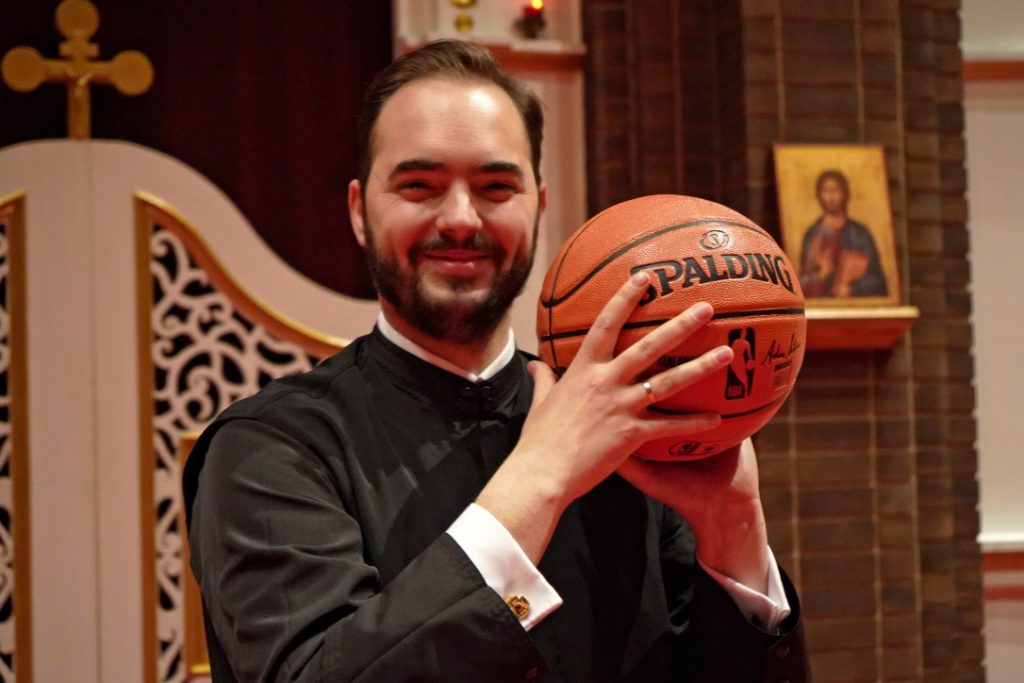 My home town of Cacak has a very rich Church tradition but in addition to this also produced many basketball legends of Serbia. In my early childhood days, the latter part appealed to me more than anything else. The very thought of being famous, people recognizing me wherever I go, being “cool” in the eyes of others, was everything I could think of. That being said, when I was around seven years old and was utterly convinced that I would be the messiah of basketball, I approached my parents to ask them to let me play. The family replied immediately with a resounding “YES”!

This approval did not happen without some requests on my father’s part. He told me that if I am to become a great legend of basketball, he wanted me to have the highest morals and discipline. He also added that no basketball player ever stays up late, drinks alcohol nor drinks coffee, nor is sluggish when it is time to practice. These words hit me so much that they became my personal ethics. Since that moment many things changed, but one thing did not: I still prefer tea over coffee!

In elementary school I was almost a legend. Everyone knew the left handed shooting guard Stefan Djoric who was without mercy to his opponents. Nice guy, they would say, but when he is out there playing, watch out and get away! I took great pride in this! Everything indicated that a very bright basketball career was ahead of me but I never stopped being determined to be the best version of myself. This implied that unlike many kids who play sports and because of that get scholarships and other perks, I decided to also be one of the top students in my class. One thing stood in my way though…mathematics! I did not like numbers nor did they ever like me. Poetry, both reading and writing, and philosophy instead caught my interest.

In my high school years, my team had many basketball games of great importance for our town. I must admit, I was scared of the great responsibility that came with them. I decided not to seek help from anyone else except God. Why God? Well, He would be the only one who would not go around saying that the mighty Stefan Djoric asked someone to help him. So I started praying fervently before every single game! I would read akathists as though I am headed to liturgy. And I was! Basketball was my liturgy and I was the high priest of it. I understood that I had a great ally next to me and that was God. Anytime I prayed to him I always scored many points. So I figured, If I keep using Him, He will get me to where I want to be.

Out of nowhere I started feeling the desire to read spiritual books and to attend classes of Orthodox Spirituality. I decided to do that only because those classes were very small and filled with unimportant people who could not ridicule me for attending them. In any case, I was very outspoken, loud and I was devouring books. My professor noticed this and started working with me more and more. I thought to myself that I would do whatever it takes for my great ally God if he takes me to the NBA. I continued studying and attending Church services without my family knowing anything about that.

When the time came for me to apply for college, I was set on studying linguistics and playing basketball. However, this great ally of mine, that is, God, started showing His real face to me. He started revealing His face to me in the depths of my soul so much that I could not envision myself with a basketball. I would say to him in agony, “What are you doing!!? You are supposed to help me get to the NBA not to destroy my desire for basketball.” Whenever I said that, there was a great silence within which was saying to me, this is not where I want you! My professor of Orthodox spirituality did not want me there either. Once we attended the divine liturgy and at the end of it he told me out of nowhere, YOU WILL BE A GREAT PRIEST! I almost got offended! I was too cool to wear those funny black skirts! No way!! But the truth of the matter was that he really touched my heart with his words, the heart that was already being worked on and transformed by God.

After many days of prayer, it was crystal clear to me that God wants me to be in the NBA…but the spiritual NBA! As a young kid I said to God “You helped me a lot with many difficult games and for that I want to become one of your priests to pay you back”. My zeal to be the next Michael Jordan in basketball was transferred to Orthodoxy and God. There was only one problem though…I had to say this to my family. When they heard the news they were shocked because this was coming out of nowhere for them. For me however, this was brewing within me since the moment I started asking God to help me with games. Having seen my desire to study theology, my parents gave me their blessing.

My college days were very spiritually exciting. I was disciplined enough to study and do the work I need, not to drink nor do anything inappropriate. Why is that so? It is because I knew God’s law…partly true. The true fact is that the words of my father not to drink, not to stay up late, to never be lazy to train were still within me to guide me through college.

In my fourth year of college, one of the bishops told me that he would like to send me to America to study which he did. I spent three years at St. Vladimir’s Seminary where I met my lovely wife, got ordained and spent some of the best years of my life. During the time of my studies at St. Vlad’s many newspapers wrote about me in my hometown. There was a big picture of me in the newspaper and the title which said “BASKETBALL EXCHANGED FOR THE BIBLE”. This provoked all kinds of reactions and people’s comments. One thing was for sure, I knew exactly that I was where God wanted me to be and I knew that everything that I did in life, even basketball, served the purpose of me being the servant of God. The initial “partnership” with God, landed me directly in front of the altar table, vested in priest’s vestments and filled with gratitude for what God has done with me in my life. After little over a year of serving in Steubenville as a parish priest of Holy Resurrection Church, I was transferred to our lovely St. Nicholas Church and the rest is history.

In addition to being a parish priest and having a lovely wife Popadija Marina and our daughter Saveta, I am also a doctoral candidate at the University of Muenster, Germany. The desire to improve myself has never left me and now, more than ever, I want to multiply my talents for the sake of the people who were given to me as my spiritual children so that I can “coach” them spiritually and prepare them for the hall of fame of Heaven which is where ultimately God wants us all to be.